So Chris Culliver, number 15 on the San Francisco 49ers, came out against gays during an interview with Artie Lange saying the following:

Lange then asked if there were any homosexual players were on the 49ers.

“No, we don’t got no gay people on the team,” said Culliver. “They gotta get up out of here if they do.”

To top it off, Mr. Culliver will most likely never see any repercussions on his statement. A statement released by the 49er’s offers a half ass apology.

What’s really awful about this is that we continually placate bigoted assholes and hold them to a lower standard. Whether it’s Garrison Hearst or Tracy Morgan, they get away with saying the most vile things against homosexuals.

Why is this? Just because this guy is going to the Superbowl? Does that supersede any measure of decency? If I had it my way, he would be suspended from the game, as well as the team. That is the only way to teach bigots a lesson. It’s sad enough that Michal Vic is still allowed to play after his dog fighting scandal.

Why do they get away with this? In my job, I would have been crucified if I said half the things they have said. Why is this different from Michael Richards going off on African Americans? His career was shattered after that. Why is this tolerated by the 49ers? Better yet, the NFL as a whole?

Can you imagine the amount of gay kids that look up to players and then they hear this? President Obama himself came out against bullying and made an It gets better video.

I dare, just one big corporate sponsor to pull out of the Superbowl. Send a message where it really hurts. Not to mention it would easily be the best way to show your solidarity to the LGBT community.

I guess the pressure was on, because on 1.31.13 the LGBT community received an apology… kind of:

In his apology, Chris Culliver says “The derogatory comments I made yesterday were a reflection of thoughts in my head, but they are not how I feel,”

What the fuck does that mean? Thoughts in my head but not how I feel? Are you fucking serious? I think Mr. Culliver is still mixed up, so I will explain it to him and all of us right here, right now.

What you are thinking in your head now, goes something along the lines of ‘Shit, I fucked up and created a big ol mess in the best gig I have ever had. Many people yelled at me, and now I have to do something about it… so I’m really sorry I fucked up… so um, yeah, it was just my thoughts and not my feelings…’

Give me a break.

A lot of people are throwing around the ‘in the closet’ card. Now there’s a lot of truth in that those who are first to object are usually those that want the dick, but I dismissed the theory at first. After further consideration I have to admit I am starting to reconsider; especially after this photo of the assailant surfaced:

Now, I’ve seen enough online profiles (believe me…) to know there is just something up with this picture. It’s indescribable as to how gaydar works (the scientist are still trying to figure it out), but my bells are ringing!

One of my artist friends said my recent works, three pieces in particular, look like burnt flesh.

What do you think?

Lesson #242: How to patch canvas (or how I spent last Monday night)

So every once in awhile, I get a little overzealous, and um… ‘damage’ a canvas. Usually in the form of a rip. Considering prestretched canvas is expensive, (especially because I don’t have the time, energy, or gumption to stretch my own) I formulated a way to repair it.

Here is my most recent victim: 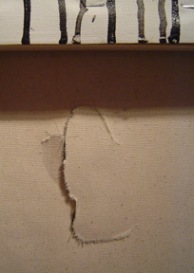 To patch your canvas, you will need the following (most likely you have these already): 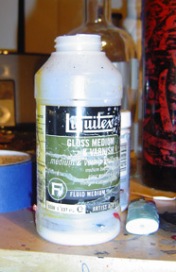 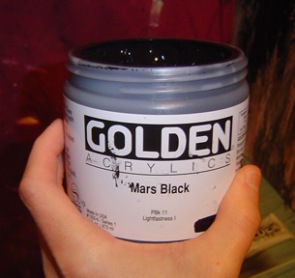 This is a pretty fast process, so you only need a couple minutes.

Let the above dry over night. Depending on temperatures and humidity, the patch should now be dry enough to pick up the canvas. Do this very carefully as some paint may have seeped through, adhering the canvas to the drop cloth, but should still be pliable as not to cause an issue. This will give you some time to examine the front of the piece and make any minor adjustments. If you do have any unsightly deposits of paint, you can smooth them out (very carefully) with your palette knife. Remember, the patch is not fully dry yet! You will see a ‘scar’, but don’t worry about perfection yet. Set it out to dry fully.

This is what the finished patch will look like. Notice the ‘scar’ detail. You can now slather on a bunch of paint to hide it, or use it as an effect in your composition. I took the picture with a flash to highlight the texture: 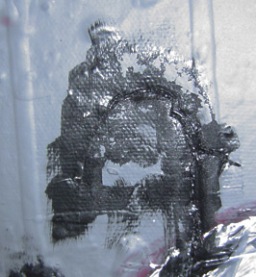